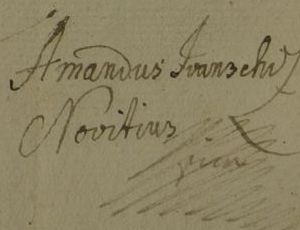 The project was financed by the Polish National Science Center (Decision no. DEC-2011/03/N/HS2/00853) and realized in the years 2012–2016 in the Institute of Musicology of the Jagiellonian University.

The main result of the project is the monograph Amandus Ivanschiz – His Life and Music. With a Thematic Catalog of Works, written by Maciej Jochymczyk and released by Musica Iagellonica publishing house (2016).

For select publications prepared in the frame of the project visit: http://jagiellonian.academia.edu/MaciejJochymczyk

Amandus Ivanschiz – His Life and Music. With a Thematic Catalog of Works

Z podsumowania książki / From the Epilogue:

The ensembles associated with monastery and parish churches were a very important element of musical life in Central Europe around the mid-eighteenth century. Yet the music created by early Classical composers, which constituted the core of their repertoire remains poorly explored. Fr. Amandus Ivanschiz OSPPE (1727–1758) was one of such musicians, active in monasteries in Ranna, Wiener Neustadt, Rome, and Graz. Recent findings reveal that he died in 1758 at the young age of 31, which is much earlier than previously thought. Consequently, the dating of his compositions and their position in the context of the transformation of musical language in the middle of the eighteenth century needs to be revisited. Despite his early passing, Ivanschiz left behind a remarkable number of compositions. About 50 extensive religious works such as masses, litanies, Oratorios, settings of Marian antiphons, Te Deum, vespers and other non-liturgical texts, as well as over 30 instrumental pieces, symphonies and string trios, have survived to this day. This volume is the first to provide a critical evaluation of the attribution of works ascribed to Ivanschiz, which brought to light the true scope and reception of his oeuvre. The fact that there are nearly 300 copies of his works preserved in various archives across eleven European countries indicates that his music was readily performed and disseminated, and places Ivanschiz among the most popular monk-composers of his epoch. At the same time, the number of variants and new versions of his works shows how they were altered by the author himself and copyists during transmission process. […]

All this significantly enhances our view of the mid-eighteenth-century style, shedding light on sources that form the basis for activity of J. Haydn or W. A. Mozart. Music of the eighteenth century, although relatively recent, still remains terra incognita in part. Unless Ivanschiz's output along with the work of his peers is taken under consideration, our understanding of the sources of musical Classicism and the general musical culture of the time will remain incomplete and inauthentic.